Laboratory of Genetics, Biotechnology and Quality

The Laboratory of Genetic Basics of Breeding was established as an independent scientific subdivision in 1979 on the basis of the Field Research Laboratory existing since the early 70s. Over 20 years, the main research avenues of the Laboratory were the development the theory of genetic breeding experiments and breeding technologies guided by PP Litun as well as information support of genetic breeding experiments. Significant achievements were made in biochemical genetics under the leadership of SM Timchuk. In particular, models of genetic regulation of protein, carbohydrate and lipid complexes in corn, fatty acid composition of sunflower oil were developed. For the first time in Ukraine and the CIS, technical corn hybrids with amylase-containing and amylose-free starch as well as supersugar corn hybrids were created.

The Laboratory of Biotechnology was founded in 1991. This laboratory originates from the Haploidy Group, which was a part of the Laboratory of Barley Breeding, and since 1981 it has investigated remote hybridization of barley and haploid production using haploproducers via embryo culture in vitro under the leadership of L.M. Naumov. In different periods, the Laboratory was headed by YeV Krupnova, VM Cherednychenko, VM Popov, and OA Zadorozhna. Since 2016, the Laboratory has been headed by OV Bilynska.

In 2006−2017, the main scientific avenues of the Laboratory of Biotechnology were in experimental haploidy of barley and sunflower, cellular selection for resistance of barley and pea to diseases, physiological mechanisms of resistance of sunflower to broomrape, creation of starting material of sunflower with altered composition of tocopherols, determination of antioxidant activity in seeds, selection of sunflower genotypes using morphological, biochemical and molecular genetic markers. Based on studies of the main factors of experimental androgenesis in vitro, the first domestic technology for obtaining barley haploids in pollen culture in vitro was developed, and its innovative elements are protected by seven patents of Ukraine. For the first time in Ukraine and the CIS, androgenic lines of doubled haploids were created and introduced into breeding.

The Laboratory of Grain Quality was based on a flour-milling and baking laboratory founded in 1934 by M.Y. Melnyk on the initiative of VYa Yuriev. In the first period, scientists were mainly focused on evaluating milling and bread-making parameters of landraces and newly created varieties of wheat, studying peculiarities of the formation of high-quality grain depending on tillage technologies and mineral nutrition. Further studies were was aimed at technological and biochemical characteristics of grain, genetic basis of quality indicators in different crops,  fraction compositions of major biochemical compounds in grain and seeds (proteins, lipids, carbohydrates), use storage proteins as molecular markers of quality traits.

Since 2017, the Laboratory of Grain Quality has been functioning as a part of a joint unit - the Laboratory of Genetics, Biotechnology and Quality. The main current research avenues are  the quality of major agricultural crops (protein and gluten contents and quality, oil content and its fatty acid composition, content and fraction composition of starch, vitamins in grain legumes, cereals and oil crops), remote hybridization to expand the genetic diversity and the creation of starting material of winter and spring wheat, as well as of starting material of cereals and groats crops with altered composition of starch. The bread-making and pasta qualities both of modern varieties and of collection accessions of winter and spring wheat, triticale, rye, and emmer are fully evaluated.

In addition to theoretical and methodological studies, the Laboratory performs routine analyses to determine the quality of all the crops bred at the Institute. It also performs commercial analyses under contracts for research institutions, agrarian enterprises of different forms of ownership and farms.

The staff of the Laboratory took part in international cooperation. In particular, in 2008 S. Didenko with a team of researchers won an IAEA grant for a 2008-2012 study in waxy crops. They completed the project "Improvement of the Quality of Wheat and Corn Grain through Induced Mutagenesis."

Comprehensive studies of genetic and physiological factors of androgenesis in vitro and improvement of the technology for mass production of double haploids of spring barley. Experimental justification of expediency of the haploid technology for creation of doubled haploid lines within some breeding programs. Creation of DN systems - populations of recombinant double haploid lines for genetic and molecular genetic research in special genetics of barley and development of marker-associated selection approaches. Improving the method for obtaining matroclinous lines of double haploids of corn.

Assessment of biochemical and technological characteristics of the quality of accessions of cereals, grain legumes, groats crops and oil crops bred at the Plant Production Institute named V.Ya. Yuriev (material preparation requirements). Detection of sources and donors of grain quality in the genetic diversity of cereals, grain legumes, and groats crops. Formation of trait collections of agricultural crops by valuable economic features, which will reflect the diversity of the crops by these features. Creation of winter and spring wheat lines with introgressions from related species (T. durum, T. dicoccum) as new starting material with extended hereditary variability in technological and biochemical indicators of the grain quality.

Identification of sunflower lines - pollen fertility restorers, which combine altered contents of tocopherol isomers with several valuable economic characteristics. The selected sunflower lines will be noticeable for increased contents of β, γ, δ and the total tocopherol content, resistance to downy mildew, increased oil content, high yield and adaptability to growing conditions in the eastern forest-steppe. Involvement of these lines in sunflower breeding for improved quality. Determination of oil content and antioxidant activity in seeds of different crops.

Testing of new domestic gametocides for chemical emasculation of sunflower. Development of laboratory tests to determine the physiological activity of gametocides. 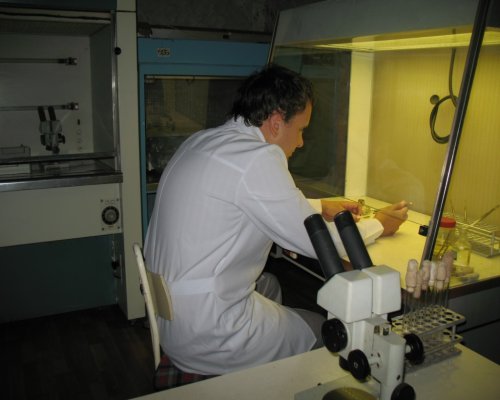 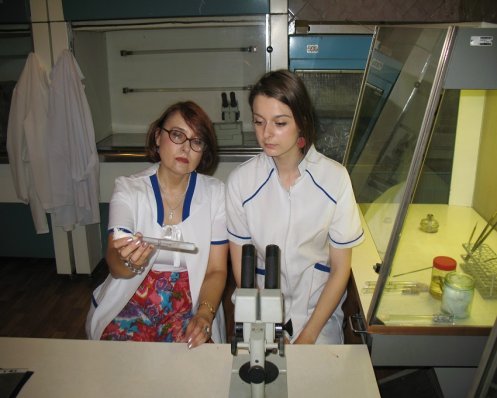 Main scientific achievments of the Laboratory of Genetics, Biotechnology and Quality (2010-2020)

Proposals for scientific cooperation and services

Laboratory of Genetics, Biotechnology and Quality performs commercial analyses under contracts for research institutions, agrarian enterprises of different forms of ownership and farms, and individuals.

The Laboratory has modern laboratory equipment. First of all, it is an Infralum, an infrared spectroscope, designed for quantitative express-analysis of grain and product qualities. It can assess qualitative indicators without preliminary preparation of samples. An NMR (nuclear magnetic resonance) analyzer does not require sample preparation either and determins oil content in sunflower seeds and other oilseeds. Gas chromatography is used to determine the fatty acid composition of oil. The tocopherol isomer composition is determined by HPLC (high performance liquid chromatography).

The Laboratory also has a full set of equipment for plant biotechnology, in particular for in vitro cultivation of plant cells, tissues and organs (file 14 link) and PCR.

It is possible to sign contracts and agreements with research institutions for joint investigations and technical cooperation.