The need to found a department was caused urgent challenges in agriculture and crop production. Their solving was started in the experimental fields of Kharkiv Regional Research Station in 1913. The further activities of this department were related to specifically to crop production problems of agrarian science, namely with the development, improvement and introduction of some agrarian approaches and novel technologies of agricultural crop cultivation. The more than 110-year scientific activities of the Department can be divided into four stages. Stage 1 in 1912–1933 included studies of basic tillage, impact of seeding rates and of methods and timing of mineral and organic fertilization on yields of field crops and plant product quality. Stage 2 (1936–1958) were studies of general issues of agriculture (crop rotation, fertilization, basic tillage, etc.), improvement of farming techniques for growing the most common field crops (timing and methods of sowing, seeding rates, basic and supplementary fertilization, plant protection, harvesting methods, etc.). Stage 3 included the development of conceptual and methodological approaches to planning and laying out of multifactor agroecological experiments and calculating the obtained data; formulation of the theoretical principles of optimization and intensification of farming techniques for growing cereals, grain legumes, groats and oil crops. Stage 4 (1993-2020) major studies were focused on agroecological assessments and development of agronomic passports of varieties and hybrids, improvement and implementation of energy-saving technologies for growing new varieties of winter and spring cereals, pea, soybean, millet and sunflower. Considerable attention was paid to the adaptability and stability of new varieties and hybrids, depending on the climatic conditions of a region, as well as to their resistance to pests.

In different periods, the team set different objectives and chose specific objects of research, but the primary purpose remained the same - to improve agronomic techniques and their combinations for the cultivation of agricultural crops to augment plant production.

In recent years, due to rising energy costs, pollution of plant products and the environment, comprehensive studies to find new approaches to preserving soil fertility, less expensive, more environmentally friendly farming techniques that would optimize reliable plant protection against pests, diseases and weeds are becoming of particular importance. Therefore, the primary purpose of the Department's research remains the agro-ecological justification of cultivation technologies of field crops in the Left-Bank Forest-Steppe of Ukraine and the development of resource-saving and ecologically safe technologies on this basis. Challenges of increasing yields and grain (seeds) quality of cereals, grain legumes and oil crops, preserving soil fertility, improving conditions of plant nutrition, growth and development and stabilizing their performance via biologization, as well as enhancing the fulfillment of the yield potentials of new varieties/hybrids and improving plant product quality in the eastern forest-steppe of Ukraine are being solved. 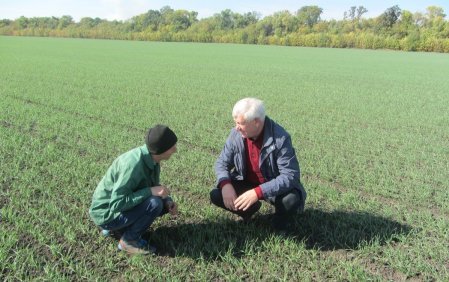 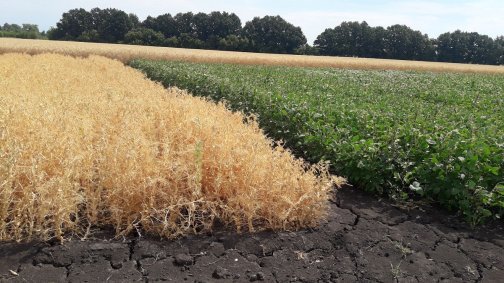 Over the last 20 years, agroecological principles of the yield capacity determination in winter and spring cereals, pea, corn, sunflower and millet when they are grown by adaptive and resource-saving techniques have been rationalized. These principles ensure consistently high grain yields and quality. Patterns in the plant growth and development, agrophytocenosis structure, yield capacity and grain quality of spiked cereals in ontogenesis, depending on the biological features of a variety, elements of cultivation technologies and weather factors, resistance to stressors have been established.

It was revealed that in the eastern forest-steppe of Ukraine unstable or insufficient moistening of soil and sharp temperature fluctuations in the main phases of plant vegetation limited agricultural crop yields. In this case, the selection of varieties and hybrids with appropriate agroecological plasticity is the most effective agromeasure to reduce the impact of weather anomalies on the plant performance. It is agroecological plasticity to regional conditions of cultivation that determines the efficiency of natural soil fertility, nutrition, forecrops, mineral and organic fertilization, and application of pesticides.

Winter bread wheat varieties were evaluated for stability, plasticity and economic value in terms of grain yield and quality. Biologization elements of adapted technologies of winter wheat cultivation using biological growth regulators and green manured fallow were rationalized and developed. Agrophytocenoses of winter and spring wheat varieties were differentiated by resistance to phytopathogens, pests, insufficient and unstable precipitation in relation to soil fertility, winter bread wheat yields and biologization elements of this crop cultivation technology. For the studied crops, optimal mathematical models of adaptation of parameters of several elements of cultivation technologies (tillage, fertilizers, seeding rates, sowing time, etc.) of modern winter bread wheat, spring bread wheat, winter durum wheat soft and spring durum wheat, spring barley, pea, millet as well as of corn and sunflower hybrids, depending on forecrops and weather conditions, were developed. The optimal degree of energy saturation of technologies for growing new generation varieties was established. A possibility of shifting the winter wheat sowing timeframe towards later dates was experimentally confirmed, which is of significant practical importance in the production conditions. It was found that because of significant warming in the eastern forest-steppe, a comprehensive approach to the choice of winter wheat sowing time should be applied, with due account for the forecrop, water content in soil, fertilization type and biological features of varieties. The optimal sowing period for modern varieties should be from 10 to 30 September, and it is allowable to extend it until October 5. Here, optimization of fertilization on sufficient precipitation makes it possible to shift the sowing timeframe to later dates without significantly reduction in the performance of varieties.

Our results demonstrated the specificity of responses of winter wheat varieties to combinations of farming techniques (forecrops, methods of basic tillage) over the years of research. The greatest differentiation of varieties by response occurred in years with favorable dynamics of bioclimatic factors during the growing period, and in years with an unfavorable hydrothermal mode varieties did not fulfill their biological potential. The level and dynamics of environmental stability, plasticity and adaptability of winter bread wheat varieties, depending on the growing conditions and different fertilization algorithms were evaluated.

Under the same growing conditions, the yields from winter triticale and rye are higher than those from wheat (on average by 6–9%), because triticale has a greater grain weight per spike (on average by 20%), and rye has a higher density of productive stems (by 12%) than those in wheat. In addition, the triticale cultivation was 14–17% more profitable in comparison with rye and wheat, and the greatest payback from mineral fertilizer was recorded for rye, while it was lower for triticale, and the smallest payback was noted for wheat. A significant gain in grain yields (on average by 51%) of winter cereals sown extremely late was achieved when the mineral fertilization was intensified (basic [N30P30K30] + pre-sowing [N15P15K15] + root [N30] fertilizations). At the same time, the highest gains were recorded after sunflower and soybean (on average 64% and 57%, respectively), and the lowest ones - after seeded fallow (29%). It was found that the increase in winter wheat yields (up to 15%) was proportional to the fertilizer dose, however, it was economically feasible to use only nitrogen fertilizers without basic fertilization, where the highest efficiency was achieved after sunflower with yields averaging 19% and profit averaging 17%, and after bean and corn pre-sowing fertilization was economically unsound.

The responses of winter cereals sown extremely late to predecessors were assessed in terms of protein content in grain. The predecessors ensuring a consistently high protein content were seeded fallow (11.1–13.0%) and corn (10.8–12.7%), while soybean and sunflowers were the least favorable. It was proven in practice that sunflower could be used as a satisfactory, equal to soybean forecrop for winter cereals. Here, fallen sunflower seeds limited the yields of varieties, but in favorable years, sunflower guaranteed fairly high grain yields from winter cereals (on average 3.65-4.08 t/ha).

We developed and improved elements of cultivation technologies for winter cereals in favorable and unfavorable environmental conditions, compared wheat, rye and triticale on by performance parameters, established patterns of their growth and development, gave economic and practical justification of different models of cultivation technologies for farms with various resource provision.

In years when winter cereals are sown late out of necessity, preference should be given to triticale and rye; of predecessors, it is expedient to use sunflower, if fallen seeds are timely eliminated; pre-sowing treatment of seeds should be carried out with a tank mixture of fungicide and growth regulator, adhering to the lowest recommended dose for the pesticide and the highest - for the growth regulator; increase in the seeding rate to 5.0-6.0 million/ha is recommended; complex basic fertilization (N30P30K30) and autumn root fertilization with nitrogen fertilizers, preferring ammonium nitrate ones at low doses (N15) and amide ones at increased doses (N30), should be mandatory; foliar spraying with plant growth and development regulators containing amino acid derivatives and with fertilizers containing micronutrients.

Based on the results, a model of resource-saving technology for growing winter bread wheat was developed. The model uses universal or intensive varieties, basic fertilizes at a dose of N30P30K30, comprehensive protection of fields against pests, diseases and weeds, root nitrogen supplementary fertilization during the tillering phase (IV) with ammonium nitrate or urea (N40) and foliar spraying during the earing phase with urea (N7). This algorithm ensures 2 or 3 class grain yields of 7.74–8.14 t/ha after black fallow and 6.41–7.49 t/ha grain pea, with the grain production profitability of 244-286%.

Most of the studies within the Department’s research programs are carried out in a stationary 9-field (fallow-grain-intertilled crop) crop rotation, which was founded in 1972. It was shown that adherence to crop rotation boosted the grain production and helped preserve soil fertility due to its natural restoration. It was demonstrated that organic and mineral fertilization has a stabilizing effect on the performance of all crops. This was especially noticeable under specific weather conditions, which were characterized by extended dry periods and elevated temperatures. The highest average yield of varieties (hybrids) was achieved with intensive organic-mineral fertilization. Provided that organic and mineral fertilizers are regularly applied, the content of nitrogen available to plants decreased, whilst the phosphorus and potassium contents increased. At the same time, subsurface tillage increased both the nutrient contents and humus reserves in the soil compared to plowing. Determination of relationships between factors affecting the soil fertility and crop yields in the rotation makes it possible to effectively manage the production processes during their cultivation.

The results of 2016-2020 studies constituted grounds for a model of optimal parameters of interactions between agrotechnological factors in agrophytocenoses of field crop rotations. Elements of top-to-bottom technologies of crop cultivation in the eastern forest-steppe of Ukraine were optimized, guaranteeing a reduction in the pesticide load by 11-12%, increase in the payback from fertilizers by 7–12%, and rise in the profitability by 10–15%.

Scientific support of modern technologies for growing cereals, grain legumes, groats and oil crops on farms of different forms of ownership in the Left Bank Forest-Steppe of Ukraine. 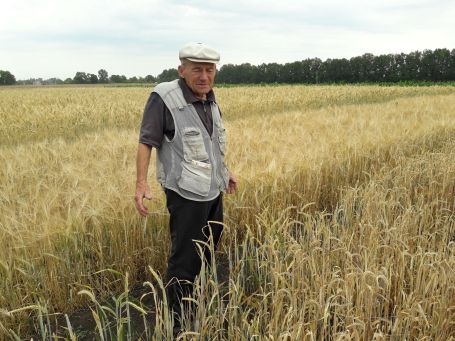 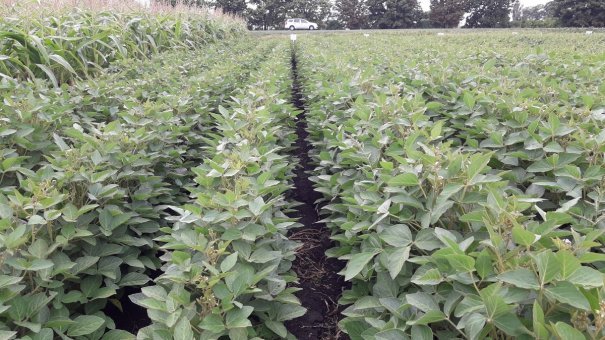 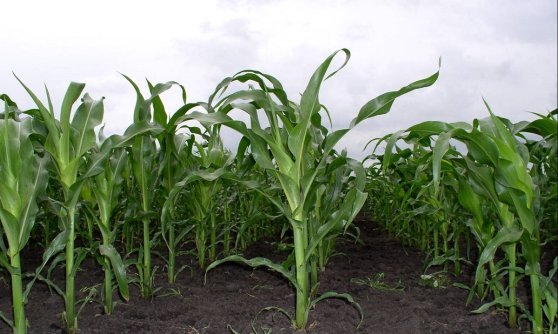